Our flight from LAX to Amsterdam was uneventful once we took off after a 2 hour delay. We had just taxied to the runway when the pilot taxied back to a repair area because the spoilers were not acting properly in his tests on the runway. This was repaired in about an hour, but then the truck which provided the electricity to restart the engines broke down. This did not seem like a good way to start the the trip, but it was to be one of the very few problems we encountered.

Our first few nights we stayed in De Bilt, a suburb of Utrecht, the Netherlands. From there we drove to the Hoge Veluwe, a large national park. It was a bit too early for the rhododendron and heather(yes, they have heather there)but the Kroller-Muller museum is a great museum for art and sculpture.

We also saw a new museum they had built since the last time we were there- Museum Onder(Under) which showed what goes on under the earth! The centerpiece-on the ceiling overhead- was a complete preserved root system of a 135 year old tree. 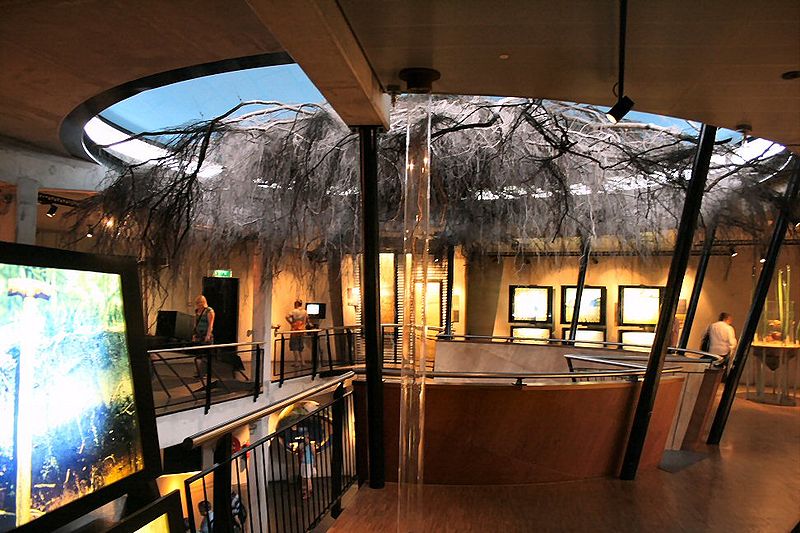 The personal highlight in this area was a visit with Albert Veldhuis and his family in Barneveldt. Albert is a 5th cousin, once removed, whom I 'met' on the Internet while doing research on my ancestry on my mother's side. When he found out we were going to come to the Netherlands, he invited us to have dinner and spend an evening with them. It was a delightful visit, getting to know relatives I didn't even know I had a few months before the trip.

Our next stop was at Den Haag, where we stayed at the beach suburb of Scheveningen. From there we visited the flower gardens at Keukenhof, a 70 acre park filled with 6 million bulbs, mostly tulips and hyacinths, but other varieties as well. It was a beautiful sunny day and it was without a doubt the most impressive garden we have ever seen.

We were in the city center to help the Dutch celebrate the Queen's birthday and the next day we spent in the small town of Delft. An eagerly anticipated visit was to the Mauritshuis for the Vermeer exhibit. We had tickets for 9 a.m. when the museum opened so we were able to see the paintings before it got too crowded.

In the afternoon we went to the Gemeentemuseum to meet a curator there with whom I had corresponded about some mid-19th century artists from the Hague School. Since the museum was undergoing some renovation and their best paintings from that school were on tour at the time, the curator took us to their 'depot', where they stored the paintings not on display or on loan. A guard pushed some buttons and the curator opened some doors and we descended a circular staircase to the floor of a gymnasium size room which had 'stacks' similar to library stacks, except these had thick wire mesh rather than shelves and were about 30 feet wide and 20 feet high. On the mesh for each 'stack' were hung paintings from floor to ceiling. The curator showed us more than a dozen of these 'stacks' covering most of their holdings of artists of this period. (They have a similar amount of more modern paintings, in fact they probably have one of the largest Mondrian collection in the world.) It was interesting to see the paintings, but it was an unbelievable experience to see the way they were stored.

From the Hague, we drove to Bruges and enjoyed this wonderful little city caught in a time warp when in the 1400's its busy harbor silted up. This happened with such drastic and sudden effect that it wasn't redone to suit other industry, so things stayed much as they were at that time. We enjoyed a general museum there, a lace museum and a canal boat ride.

We did have a dinner there to remember at the grand Cafe in the Main Square. We ordered the mussels, a specialty there, and for the main course each got a huge pot(Ann estimated 3 quarts) of mussels, which we almost finished, saving a bit of room for the chocolate mousse dessert.

From Bruges we drove through the Belgian countryside and then the French countryside to the busy city of Rouen to a hotel with a room overlooking the Seine. We only went to one museum there, the Museum of Fine Arts, and enjoyed a special exhibition of Impressionist works. We did, however, visit all 4 of the major cathedrals there, and enjoyed the a capella singing in one by a group of men and a concert by a group of singers from the Isle of Wight at the largest, the Notre Dame Cathedral. Especially moving was their singing of Haydn's "The Heavens are Telling" in that setting.

One day we drove from Rouen down the Seine valley and enjoyed two abbeys, but especially Jumieges Abbey, now spectacular ruins. On our drive from Rouen to Paris we stopped at Monet's home and gardens at Giverny. It was a beautiful sunny day and the gardens there as well as on the grounds of the American Museum there were beautiful.

Thanks to Ann's navigation, we made the drive into Paris to drop off our car without a single wrong turn. In Paris we stayed at a hotel on rue Cler, an area with a wine shop, two cheese shops, a number of bakeries, a Chinese take-out(quite unlike the American variety), a number of vegetable shops, and many more. We ate a few meals  from these stores in our hotel room as well as some meals from restaurants in the area. We spent most of one day at the Louvre and another day at 4 other museums, of which our favorites were the Rodin museum and Musee' d'Orsay. On another day we saw Notre Dame again with huge crowds of people, and Saint Chapelle with fewer. We enjoyed the impressive stained glass at both. Of course we took a boat ride on the Seine.

From Paris we took a train to Basel, where we left our luggage at the ship for our Rhine cruise and spent a few hours in the city, especially at the 12th century Munster. In spite of the gray weather, the Rhine cruise was very interesting. We were surprised by the number of locks (9 the first day) and the size and the amount of drop(the locks were in the 40 foot range!) in the level of the river. The castles and vineyards, especially between Mainz and Coblenz, were interesting to see again. We enjoyed the stops in Strassbourg, Boppard and Cologne and walked around each of those cities a bit. The meals aboard ship were excellent and we were fortunate to have very interesting people at our table-one couple from North Carolina and one from South Africa, which made for very interesting table conversation. The ship went as far as Dusseldorf, where we boarded a bus for the trip to Amsterdam. 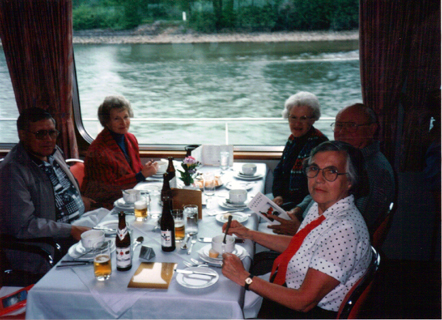 In Amsterdam we visited the Rijksmuseum, the Van Gogh Museum, and the Amsterdam Historical Museum. We also took a number of walks which took us to the flower market, the shopping area of Kalverstraat, and along the many canals of Amsterdam.

A highlight for me was the time-a total of about 8 hours over two days - I spent in the study room of the Rijksmuseum looking at drawings and watercolors of the artists of the Hague School. You may bring into this study room only pencils(not pens) and paper to take notes. They place a half-inch felt pad and an easel on the table in front of you and bring out a box of 15-20 matted drawings or watercolors. They open the box and transfer the works from the box to its cover and you may then look at the drawings one at a time, place them on the easel if you wish, and then return them to the box. All of this is under close watch by one of the 4 or 5 people who work there. When you finish with a box, they close it, take it away and bring another box of the same artist or another you may have requested and go through the same process. Although Vincent Van Gogh is not considered to be of the Hague School, early in his career he did take some art lessons from Anton Mauve, one of its most famous members. So I was dumbfounded when one day I saw a pencil drawing of a man fishing with a net which was signed VINCENT. It obviously has not been authenticated as one of his works, but was labeled, Vincent Van Gogh (?), with the question mark, so it may not have been his work, but at least some people think it was. And I saw itand handled it. It was Saturday so no curator was around to tell me the history of the piece, but I was impressed. Ann spent one of those days riding a canal boat with an all-day ticket.

Our flight home at the end of 3 1/2 weeks was long but uneventful and although we enjoyed the trip immensely, we were happy to be home in La Jolla.